I'm going through transcriptions of my interview from June 6, 2010, with Abdessalam Najjar, one of the founders of Wahat Al-Salam/Neve Shalom (aka the Oasis of Peace), who now works in the community's Communications & Development Office. 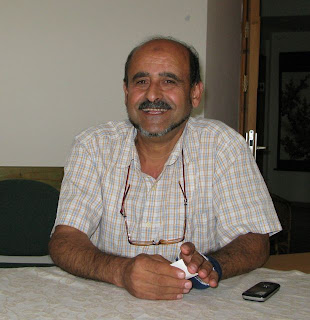 Part 1: History of Wahat Al-Salam/Neve Shalom
Tell me about this place.

Our name is Wahat Al-Salam/Neve Shalom. It started as [a] dream more than 40 years ago. What I know from the founder Bruno Hussar, a Dominican priest, he was active in a interfaith dialogue in Jerusalem, and this group was created in the end of the 60s, beginning of the 70s, and as a result of this dialogue, he had an idea to create a community where people from both sides of the conflict can live together, make their daily life decisions, and by that way maybe he will put a practical basis of the dialogue he was participating in Jerusalem. … The first group that came to live with him here in this piece of land, it was, in the end of the seventies.

I remember myself meeting Bruno when I was a student at the Hebrew University and I was active with the Jewish-Palestinian group dialogue. And he invited us to come to his village Wahat Al-Salam/Neve Shalom because we had in—I can’t say we had—we played with an idea of having school, bilingual school, Arabic and Hebrew school.

And there wasn’t one before then?

No. He invited us to make our school in his village Wahat Al-Salam/Neve Shalom, and we came to visit him. I remember myself coming in the beginning of the ‘76 and the first surprise that we didn’t find any village.

There wasn’t anybody there?

Nothing. Just Bruno was waiting for us, and a bungalow of bamboo. He was sitting on a stone just like this and we  ask him, "Where is it? Let’s go to it." And he said, “Ah, you are here. Now we have Neve Shalom.”

We were studying agriculture in the faculty of agriculture in the Hebrew University and we were trained to make a practical steps of creating a new village and all of these things and not to relate to dreams and something like that. But, it seems that his personality was so charming, so attractive, and when he saw that we were hesitating, he went with us or with our hesitation. In the end after some months, we had here very big summer camp for Arabs and Jews.

What were the ages of the people?

It’s mainly adults. Mainly adults—students and up. From that summer camp, a nucleus group was created to start this community.

And what year was that?

The summer camp, it was in 77. In 78, the first families came here. We were five families in six months we came together here. And since that time, this community’s growing, slowly slowly, but all the time, growing up. Today we have 55 families living already and, in the last month, we accepted another 30 new families.

Newer Post Older Post Home
Subscribe to: Post Comments (Atom)
A NOTE on this BLOG: In 2010, Israel's kibbutz movement celebrated its centenary—100 years since the founding of Degania along the Sea of Galilee. This blog is one former volunteer's way to recollect his own experiences of communal life, to share news and research about the changing kibbutz movement, and to reflect on the quest for utopia in a divided land.
Watch for the book: Chasing Utopia: The Future of the Kibbutz in a Divided Israel, forthcoming with ECW Press (Fall 2016)