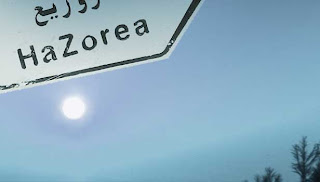 While academic studies have tracked the extent of changes on Israel’s kibbutzim over the past 20 years, for the best window into how those changes have been debated and how they have affected the lives of individual kibbutzniks, I’ve turned to documentary film. Over the past decade, a new sub-genre of Israeli filmmaking could earn the label “privatization cinema”—mostly documentaries, but also some fascinating fictional work, too. I’ve watched four already, and am looking forward to the upcoming release of a fifth. Each offers a different perspective and has helped me triangulate the emotional nuances of changing life in these communities.

One of the first I saw was HaZorea, a documentary produced and directed by Ulrike Pfaff, a former volunteer from Germany (now studying to be a police detective), who did several tours of duty on the kibbutz of that name. (Curiously, I discovered that linguist/political critic Noam Chomsky also spent a month on Kibbutz HaZorea with his wife in 1953; he is a controversial Jewish critic of Israeli foreign policy but retains fond memories of kibbutz life.) Pfaff returned to HaZorea for two weeks in September 2007 to film 50 hours of interviews and footage with a crew of three and a budget of about $25,000.

I watched the film three times as I prepared to give a post-screening talk about Pfaff’s documentary and the general changes to the kibbutz movement at the Vancouver Jewish Film Festival last November. The film offers what feels like an objective glimpse at the lives of the kibbutzniks at the time and some of the anxiety around potential changes to the lifestyle of the kibbutz. (HaZorea was still a traditionally communal kibbutz but in the midst of debating and voting on privatization measures; the documentary ends with the results of that vote—SPOILER ALERT!—in which the changes are not approved.) There is a slow-paced, casual atmosphere to the movie as a whole that reflects the languorous mood so typical (and so attractive) of kibbutz life and so at odds with the speed-tweaking pace of a city like Tel Aviv.

While Pfaff includes interviews with many kibbutzniks, young, old and middle-aged, two become the focus of the narrative: Hanna, one of the German-speaking pioneers who founded HaZorea, and Oriel, a “son of the kibbutz” who now lives in Tel Aviv and has returned to decide whether or not to become a member. (Pfaff actually returned to Israel to film two days of footage and interviews with Oriel, once she heard of his situation, because he was the perfect vehicle for the documentary’s drama—a kibbutz sitting on the fence between past and future.) “The kibbutz is a paradise for children and old people,” Oriel says, reflecting nostalgically about his freedom growing up in HaZorea’s “society of children”. “And for dogs!” quips Ran, a friend who still lives on the kibbutz (and provides much of the movie's comic relief).

But the young adults and the middle-aged couples (and even, more reluctantly, the older residents) in the movie all seem to want changes to the communal rules that have guided their lives. When I spoke to Pfaff via Skype, she admitted that her own main criticism of the movie was a failure to find and interview those kibbutzniks—who remain in the majority—who don’t want changes to their community. She also admitted that while reaction to the film has largely been positive, criticisms have come from both ends of the spectrum.

“I don’t know if it’s possible to make a really objective film because in the end I can decide by editing what I want to put and what I don’t,” she told me. “There are other people that didn’t think it’s objective. [One viewer] was very, very mad at me about this movie. He said that I did it too negative and not objective. And there was another girl, born on the kibbutz, and she said it was too romantic and too positive about everything. So I think probably it is not possible to do it objective.”

Still, whether objective or not, HaZorea does a wonderful job of capturing both the pioneering spirit of the kibbutz founders, the charms and frustrations of one community’s current incarnation, and the uncertainty faced by the young people who will lead Hazorea into the future.

Newer Post Older Post Home
Subscribe to: Post Comments (Atom)
A NOTE on this BLOG: In 2010, Israel's kibbutz movement celebrated its centenary—100 years since the founding of Degania along the Sea of Galilee. This blog is one former volunteer's way to recollect his own experiences of communal life, to share news and research about the changing kibbutz movement, and to reflect on the quest for utopia in a divided land.
Watch for the book: Chasing Utopia: The Future of the Kibbutz in a Divided Israel, forthcoming with ECW Press (Fall 2016)